Transforming Change Management in the Organizations

Change management is traditionally one of the main risks and the main reason for the failure of technological solution implementations in organizations.

Human beings naturally have an aversion to change, to uncertainty, to the unknown, to the loss of the status quo, and this leads us to oppose it, going to the extreme of unreasonably boycotting the engine of change.

Among the main causes of this fight against the change are the lack of communication of the reasons and benefits of the change, as well as the failure to involve the people who will be affected by it in the definition and design of the process and the tools and actions that will be carried out. This is the classic approach to change management. It is approached as just another project, with a plan that has to be fulfilled, an initial scope that is unchangeable and for which the opinion of those affected has not been taken into account, and giving more value to the deliverable and the final milestone than to the continuous change process.

In contrast to this traditional approach, Jason Little proposes a new approach: Lean Change Management. This one, based on agile principles and values as a good follower of the principles of Management 3.0, is based on two main attributes: it focuses on the people who will be impacted by the change, to whom it gives the leading role (people-centric) and makes use of continuous feedback to adapt the change according to the needs of the moment (feedback-driven) the response to the measures that are being taken (called experiments).

Lean Change Management is inspired by agile principles and values, and the Lean Startup framework, proposing a life cycle based on hypotheses or experiments around the change that have to be validated, to learn and thus determine whether to persevere with the change or to pivot and explore alternatives. 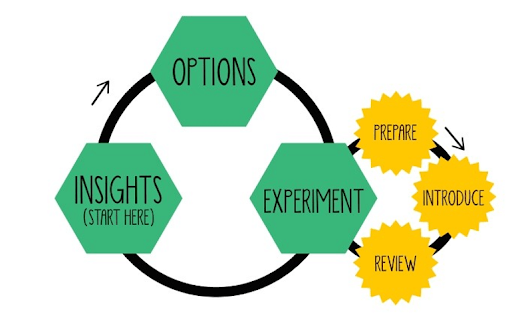 Experiments, in turn, have their own life cycle:

For each of these phases of the cycle, a series of complementary tools or frameworks are proposed, which are taken from different sources, from traditional change management, behavioural psychology or agilism.

In this way, Lean Change Management proposes the use of ADKAR® to obtain the starting situation for the organization. It is a method used to analyze the current state of the organization, thus being able to assess a priori the risks and the probability of success of a change process. It is based on five dimensions:

Other models he suggests are OCAI or Schneider, which help to identify what type of culture prevails in the organization.

The last one describes the following cycle and serves as a basis for exploring what needs to be done to facilitate the adoption of the change and to evaluate the change:

One of the main keys to success is to identify as soon as possible the set of early adopters within the organization who will support the change. Relying exclusively on external staff weakens the transformation process, as internal staff feel fear and imposition. However, seeing colleagues involved in the process, evangelising and sponsoring it is a positive reinforcement that removes barriers.

Another key is the use of information radiators, making the change management process visual and transparent. It encourages people’s participation, enriches the process, allows for feedback, simplifies resistance to change, and generates more agents of change. This approach makes the process dynamic and participatory, moving from a static, top-down plan to a living cycle in which everyone collaborates and everyone helps to shape it.

Again, as with the introduction of agile approaches in organizations, the fact that the information radiators are physical, at least in the early stages, is very important. Making the information physically visible, touchable, is key.

In conclusion, Lean Change Management proposes a more empirical model of organizational transformation, based on the participation of people and the continuous adaptation of the plan on the basis of the feedback obtained from the experiments put into practice.

If you want to know how beNIMBL can help you, visit our website or get in touch!

This website uses cookies to improve your experience while you navigate through the website. Out of these, the cookies that are categorized as necessary are stored on your browser as they are essential for the working of basic functionalities of the website. We also use third-party cookies that help us analyze and understand how you use this website. These cookies will be stored in your browser only with your consent. You also have the option to opt-out of these cookies. But opting out of some of these cookies may affect your browsing experience.
Necessary Always Enabled
Necessary cookies are absolutely essential for the website to function properly. These cookies ensure basic functionalities and security features of the website, anonymously.
Functional
Functional cookies help to perform certain functionalities like sharing the content of the website on social media platforms, collect feedbacks, and other third-party features.
Performance
Performance cookies are used to understand and analyze the key performance indexes of the website which helps in delivering a better user experience for the visitors.
Analytics
Analytical cookies are used to understand how visitors interact with the website. These cookies help provide information on metrics the number of visitors, bounce rate, traffic source, etc.
Advertisement
Advertisement cookies are used to provide visitors with relevant ads and marketing campaigns. These cookies track visitors across websites and collect information to provide customized ads.
Others
Other uncategorized cookies are those that are being analyzed and have not been classified into a category as yet.
SAVE & ACCEPT
Go to Top